Firms bolster efforts to protect jobs by reducing hours and pay and look at restructuring operations as they head into the Autumn, according to the latest CBI/Pertemps Network Group Employment Trends Survey.

The annual survey – in its twenty-third year and with 248 respondent firms – revealed a two-speed jobs market emerging with 51% of firms expecting to maintain or increase their permanent recruitment in the next 12 months and 46% planning to either reduce permanent recruitment or not recruit at all. This balance of +5%1 compares to a balance of +56% in last year’s survey.

“The UK labour market has been under heavy stress since the outset of the Covid-19 crisis and, although the economy has started to re-open, pressure on firms remains acute. With ongoing social distancing, higher costs, lower demand, local lockdowns and fears of a second wave, firms are tempering their recruitment plans.

"Businesses are focusing on bolstering their efforts to protects jobs and livelihoods, from cutting hours and reducing bonuses to restructuring. But continued cost pressure, unpredictable demand and uncertainty around Brexit negotiations are making trading conditions tough.

“We are seeing a two-speed recovery. While some firms are already looking at creating new jobs, most others are in survival mode. Young people are facing one of the most difficult jobs market in decades and supporting them through this difficult time and ensuring they have access to opportunities will be crucial. It’s encouraging to see one in ten firms looking to use the Kickstart Scheme.

“The Government support schemes have been lifesaving for businesses, but firms have reached a fork in the road. With many of those schemes set to unwind in the coming months, companies will be forced to follow-though on redundancy plans, which will be particularly devastating for those hard-hit sectors like aviation, hospitality and leisure.

“As the Job Retention Scheme unwinds, it’s crucial another lifeline is found. A new short-time working scheme should be open to all businesses who might be struggling now, but who have a sustainable future after this crisis.”

“Results of the survey are generally consistent with recruitment market trends up and down the country. It is not uncommon for permanent recruitment to drop significantly during periods of recession and, usually after a short recess, the temporary side of recruitment kicks back in to provide opportunities for people to enter into new roles. We have already seen signs of this during recent weeks, with August recording a definite upturn in recruitment activity as businesses started to plan their reopening.

“Flexible working arrangements will be a priority for businesses, as they continue to manage change, so it is not surprising to see nearly half of respondents putting transformation and restructuring plans as a priority. Increasing numbers of clients we are talking to are looking for recruitment services ‘on-demand,’ with the ability to expand recruiting capacity where and when it’s needed.

“Our younger generation can often be hardest hit at times like this, so I do take some comfort in those businesses who are still favouring apprenticeships and traineeships. Young people are facing plenty of uncertainty and will require all the training and support they can find from UK businesses.”

Businesses look to freeze pay as they struggle with costs

Firms are taking a cautious approach on pay in an attempt to preserve jobs. Asked what approach they expect to take at their next pay round, a third (33%) of respondents plan to implement a pay-freeze across all roles (up from 5% in 2019). Meanwhile, 8% plan above inflation increases and three in ten (29%) aim to raise pay for their employees in line with inflation (down from 14% and 54% in 2019)3.

“Businesses are considering a range of alternatives to ensure that redundancies are an absolute last resort, and it’s right that they discuss these options with workers. Through these difficult consultations they are seeking the right balance between pay restraint and job losses.

“Firms are urging the Low Pay Commission to be cautious in order to help keep more people in work. Businesses believe that the emergency brake on the National Living Wage needs to be pulled to protect jobs in the short-term, whilst maintaining the ambition to reach its target as soon as possible.” 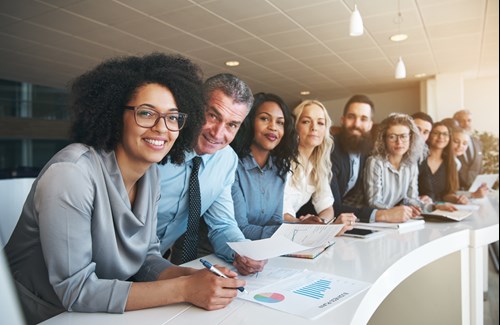 Diversity and inclusion remains high on the business agenda: asked whether companies’ focus on D&I has changed over the last 12 months, nearly two in five respondents (38%) have either slightly increased or significantly increased their focus while the remaining 62% report no change.

There has been a broad based increase in action on all forms of diversity, but the largest increase has been to focus more on race at work (34%)4, with nearly one fifth (17%) of respondents starting an internal process to assess how they recruit, retain and progress their BAME employees. Meanwhile 14% of firms are organising internal activities to raise awareness of the experiences and outcomes of BAME employees.

“The economic benefits of having a diverse workforce and inclusive culture are widely publicised, but it is also true that there is still much work to do in the D&I arena.  It is good to see that an over a third of organisations have increased their D&I efforts, and 62% have maintained their focus.
“We know from analysis that individuals with protected characteristics have been hit harder during this crisis and it also can take them a lot longer to recover from the devasting effects of high unemployment rates. Events in recent months have seen an increased focus on race as employers bolster their efforts to understand the issues BAME employees face.
“If businesses are serious about addressing these issues, BAME voices need to be heard and be represented at all levels and meaningful action needs to follow. The fact that employers are now proactively reviewing their internal practices is a positive move and one which their recruitment partners should definitely mirror.”

Recognised for delivering exceptional work for clients over the last year, Pertemps has been shortlisted in two categories by the Tiara Talent Solutions Awards.

Pertemps has been named as one of the UK’s top companies to work for - for the 15th year running.

Chairperson and Managing Director, Carmen Watson, has won the LadiesFirst Inspirational Woman award in recognition of her remarkable contributions to the community.