Over the recent months, there has been supply chain disruption resulting in delayed deliveries, increased prices and, in some cases, large gaps on supermarket shelves. Even the largest restaurant companies, supermarkets and homeware stores with robust supply chains are reporting problems. The causes of this disruption are complex. 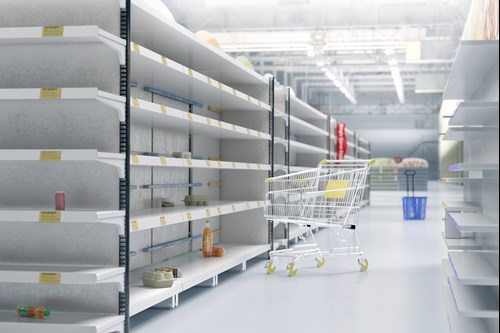 Part of the problem is that demand in the UK economy has recovered from the low levels seen during the pandemic more quickly than supply. The single biggest cause of supply chain disruption is staff shortages, with Brexit, Covid and wider economic conditions all contributing.

It’s recently been highlighted that, across the whole UK food supply chain, there were about half a million staff shortages, representing 12.5% of the total workforce required.

Why are there staff shortages?

Two of the biggest factors are:

Brexit has made it a lot harder for UK firms to recruit from the EU. At the end of the Brexit transition period, free movement of people ended, and the government introduced a new points-based immigration system, whereby EU nationals are treated the same as citizens from the rest of the world and typically need to meet conditions such as salary thresholds and English language skills to obtain a work visa. Some sectors, such as the agriculture, food manufacturing and haulage industries have historically employed high numbers of EU nationals and have found it tough to replace EU workers.

The pandemic has also played a role in driving staff shortages. Many EU nationals working in the UK before the end of the Brexit transition period (Most of whom would have been entitled to remain in the UK after Brexit through the EU Settled Status Scheme) decided to move back to their native countries and have not returned.  Figures from the Office for National Statistics show that the number of EU nationals employed in the UK fell by 5% from the end of 2019 to the end of June 2021. The haulage sector is among those affected, with ONS figures showing that around 14,000 EU national HGV drivers have left the UK in the last year, a decrease of nearly 39%.

The impact of IR35

While the blame for the disruption tends to fall on the pandemic and Britain leaving the EU in the majority of headlines, many workers themselves are pointing to the government’s reckless self-employment tax changes.

According to a recent survey of hauliers by the Road Haulage Association, over 53% believed that a key reason for the driver shortage was down to the new IR35 rules that were introduced in April 2021. Furthermore, industry leaders have suggested that the changes to the IR35 legislation have led to a decline in earnings by 25% for those drivers that had changed from being self-employed to employed to protect their income as much as possible following the introduction of the new rules. Suggestions are this is clearly a major factor in the recent challenges within the HGV sector in addition to working conditions.

Will the supply chain problem get worse?

It is hard to predict if supply chain problems will get worse. The food and drink sector has already raised concerns about how well the sector will cope with the additional demands of the busy Christmas period, and lasting damage to just in time supply chains. Some toy manufacturers and wine producers have also warned of possible shortages.

Winter could also bring a rise in Covid case numbers, resulting in more staff absences through illness or self-isolation, and subsequently more disruption to supply – watch this space!